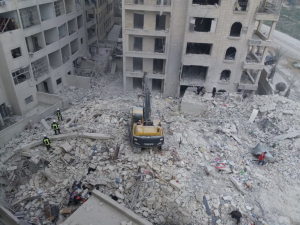 Idlib, Syria: the rubble being removed today by rescue teams is from a 6-story building razed to the ground by Russian bombers. They are trying to recover the bodies of several people, including children, who they know are buried in the cement.

Perhaps those who call themselves socialists can drop the Lenin quotes & stop citing Tariq Ali, John Pilger, Patrick Cockburn & other confusionists, along with Assad propagandists, long enough to explain to us how bombing civilian apartment buildings is in the interests of Assad’s national sovereignty & why his national sovereignty takes priority over human lives in Syria.

The only principled demands are for the immediate cessation of bombing by Syria, Russia, & the US coalition & for the immediate, unconditional withdrawal of all foreign military forces from Syria.