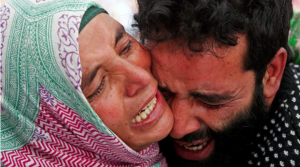 Kashmiris are commemorating Black Day today, as they do every year, to mark 70 years since October 27th, 1947 when India forcibly & illegally laid claim to the adjoining state of Kashmir. It is a day of grieving & continued resistance to colonialism & military occupation. For most of that time, their struggle for self-determination sustained an international news blackout or was vilified as a Pakistan-based terrorist movement. Kashmiri activists brilliantly used social media to educate human rights activists around the world about the character of their struggle so that today there is a growing movement in solidarity.

We should take a moment to honor all who have died in this momentous struggle & commit ourselves to standing in solidarity with Kashmiris until they have achieved azaadi/freedom.