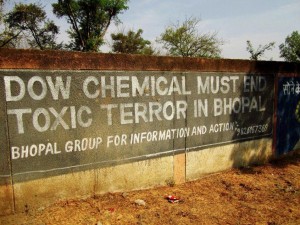 In 1984, there was a toxic gas explosion at the Union Carbide plant in Bhopal, India. The accident was due to neglect of equipment & safety maintenance in order to save money & caused the pesticide plant to leak toxic gas into the city, killing an estimated 25,000 people, injuring half a million, & contaminating the environment & water supply. Union Carbide, a US-owned company, became a subsidiary of Dow Chemical in 2001.

Dow has refused to contain chemical efflux from that explosion all these years which has poisoned the underground water reservoirs. Over 30,000 people still live nearby due to extreme poverty & are forced to drink, bathe, & cook with contaminated water which has created new generations of children suffering chemically-induced illness & serious neurological & physical disabilities & disfigurements–not unlike what the children of Iraq have suffered from US chemical warfare.

The explosion is considered quite justly as one of the world’s worst industrial accidents because the damage is ongoing & unremitting. It is also without question one of the worst cases in the world of legal malfeasance & injustice because attempts to force Dow to clean up the environment & provide compensation to the victims have been manhandled in Indian & US courts.

Dow has refused to appear before Indian courts to face criminal charges from the accident. And in June 2012, in a grotesque case of the wolf guarding the chicken house, a US court absolved Dow of all liability in the Bhopal disaster–which means they are not liable for compensation, remediation or pollution-related claims. Dow was the primary peddler of Agent Orange, the defoliate used by the US military in Vietnam that caused numerous health problems & death among veterans & their offspring & continuing, catastrophic health problems for the people of Vietnam. The US court may have been trying to shield Dow & the US government from an avalanche of litigation from Vietnam as well as from victims in Iraq.

Dow is ignoring these notices to appear before the Indian court making it a fugitive from justice & in legal maneuvers which violate the Mutual Legal Assistance Treaty between the US & India, the US Department of Justice is running legal interference on behalf of Dow. Activists charge the US government with actively aiding Dow in evading criminal charges.

The latest petition from the Bhopal court demands Dow representatives appear before it on July 13 2016 to answer criminal charges. To force Dow & the US government to respond as required by law, Bhopal activists will be launching a petition this coming Sunday to obtain 100,000 signatures in one month. Time & political support are of the essence.

It’s over 32 years since the Union Carbide explosion & Bhopal activists have become a model of relentless pursuit of justice, including campaigning to have Dow removed as a sponsor of the 2012 Olympics in London & constant protests & memorials demanding justice.

When the petition is posted on Sunday both on FB & onhttps://petitions.whitehouse.gov/, please consider signing, sharing, & widely distributing on Twitter, FB, & wherever you think it can get support. US citizens have a particular responsibility for addressing the evils of our government & the corporations that rule it but people from around the world are needed to force justice from the US government.

(Photo from FB wall of Roshen Chandran, a Bhopal activist)