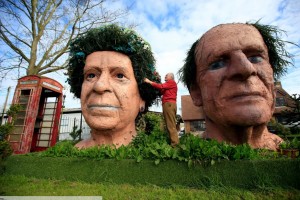 This is a case of sycophancy gone terribly wrong. Ben Bennett of Berkshire, UK built these terracotta & artificial leaf sculptures of Betty & Phil Windsor in his front yard to honor Betty’s upcoming 90th birthday. He probably hoped they’d see the effigies as they drove by on their way to the local palace & he would derive some glory.

For that, did he have to go Goth? So Boris Karloffian? He might better have stuck to curtsying when they passed. He captured their images perfectly but the art of royal portraiture is flattery–something which escaped his execution if not his artistic vision.

Writers are also falling all over themselves to flatter Betty. One panegyric damned poor Betty with lavish praise, describing her as utterly vapid, indulgent & indifferent to her children, criminally cheap with her employees, & steady as a rock in her performances as some kind of sacred icon.

Most of Betty’s ardent admirers haven’t yet weighed in, especially the bookies who owe so much of their fortunes to her & other Windsors. We ought to get a real earful of drool then.