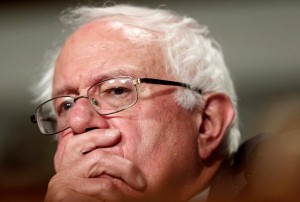 Just got off the phone with my older sister who first got me involved in politics with the Civil Rights Movement. She has remained deeply political & radical–except when it comes to elections where she’s a lesser evil voter. Like many progressives who can’t stomach Clinton’s corruption, she’s eyeballing Bernie Sanders as the lesser evil candidate.

We could quibble all day over whether Sanders’ rhetoric is worth its weight in horse manure. But what is not arguable is his staunch commitment to Israel. That isn’t a dispensable, throw-a-way commitment compared to all the positive things he stands for. The struggle of Palestinians is of historic importance, of consequence to suffering humanity around the world. For 67 years they stood nearly alone defying colonialism & the combined militarism of Israel & the US–against all odds. Their struggle has been singular in its intransigence & courage.

Imagine the power of a movement that ends Zionist colonialism & builds a democratic secular state where Jews & Palestinians live as brothers & sisters! Consider what that would mean for others around the world suffering the barbarisms of racism & colonialism under neoliberal capitalism! Such a specter haunts the nightmares of those who run this world. But it is what justice demands.

That’s why Sanders’ support for Israel is something that cannot be dismissed as a regrettable lapse. It is a fatal flaw, a condemnation because he is taking a stand with tyranny & calling it justice. He’s not the lesser evil; he’s the same old crap & we’d sure as hell like him to stop claiming he’s a socialist. We have enough problems with our own.