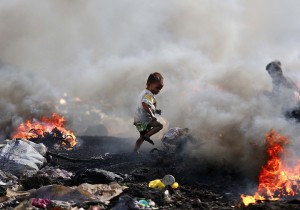 In 2001, as the anti-globalization movement was erupting around the world, a Swedish nonentity named Johan Norberg wrote a book titled “In Defense of Global Capitalism.” At the time, our man’s resume was pretty paltry for taking on the daunting task of defending neoliberalism, the barbaric phase of capitalism. His only credential for the job–other than considerable vanity–was a brief youthful foray as an anarchist. He was commissioned by a Swedish libertarian think tank to do the job so perhaps he has a way with words along with his willingness to mangle reality.

It’s now translated into several languages & as happens with all those who sing for their supper, Norberg’s fortunes & prestige are enhanced. He’s now ensconced in the global network of think tanks promoting libertarian policies & neoliberal predation according to the gospel of Milton Friedman.

One shouldn’t condemn a book one refuses to read but is there really anything to learn from a book arguing neoliberal plunder has reduced poverty, hunger, infant mortality, & inequality? You get a better education watching “Jeopardy.” Or for that matter, reading the side panel on a cereal box.

The book was praised in Canadian media as a refutation of Naomi Klein & in US media as a refutation of “dull old Marxists.” The kiss of death was the rave review by Ben Stein, the Fox News commentator who is a cornucopia of right-wing idiocy & cruelties. Stein opposes women’s reproductive rights; disavows climate change; campaigns for creationism; defended Israel’s commando raid on the Gaza Freedom Flotilla carrying humanitarian aid to Gaza (nine unarmed solidarity activists were shot & killed in 2010); denounced Black residents of New Orleans during Hurricane Katrina as gangsters, gang bangers, & looters; & claimed Michael Brown in Ferguson was not unarmed because he was “full of muscles.” If that fool found Norberg’s book a “stunningly insightful, brilliantly detailed refutation of the crank theories of the anti-globalists” it might best go straight to toilet paper.

Those think tanks can hire the best brains money can buy (Norberg & Stein would not be among them) but there’s no thinking their way out of the vortex of political, social, & economic crises erupting across this planet where the ratio of human impoverishment & suffering grows in direct relationship to neoliberal plunder. There are few options & no solutions within the system; that’s why police & military repression are so ubiquitous.

This tiny boy is running from burning electrical wires in a dumpsite in Manila, Philippines where the unemployed scavenge for recyclables. This is of course neoliberal waste management. Working people have the right to dream big for their kids, to want their kids raised in a world that doesn’t stink of manure, or where they have to pick through garbage to earn a living. We need to look at our own options.