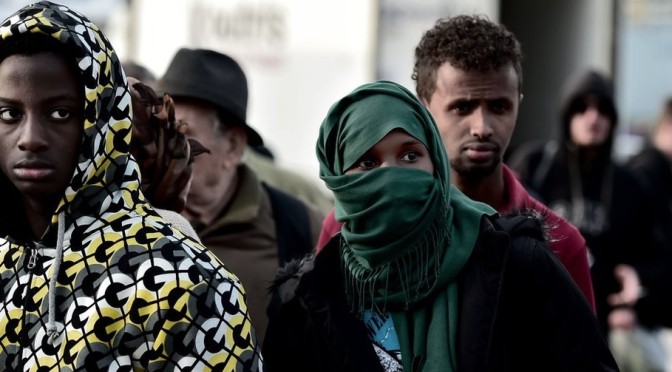 Most people around the world feel cynicism toward their governments; contempt might be more appropriate but that would be too equivocal. What their actions merit is nothing less than hatred for the breathtaking disregard they show toward human life. Hatred is maligned but it’s the very life force of justice. Governments belong to the oligarchs who see working people as mere chattel. Justice holds human beings, of whatever stature in life, as brothers & sisters. Every violation of that trust deserves nothing less than hatred.

So when we read yet another report of undocumented immigrants drowning in the Mediterranean Sea trying to cross to Europe, we take that very personally. The young immigrants in this photo are disembarking from a rescue vessel in Piraeus, Greece after a boat carrying them from North Africa capsized on May 5th. The Greek coast guard said 36 people were rescued & 22 people drowned, including four children. Several are missing & may never be accounted for. What the hell does the coast guard think happened to them? That they miraculously incarnated back on the coast of North Africa? They drowned due to the European Union’s (EU) barbaric immigration policies.

This was the third fatal immigrant boat disaster just this year off the Greek & Turkish coasts, including one in January & one in April. Traumatized survivors speak of the horrors of watching their spouses & children drown. Many children died in the January capsize. But there are just as frequent capsizes & drownings all over the Mediterranean. There was in fact another just yesterday off the coast of Libya where 36 immigrants died.

The Libyan official who addressed the disaster blamed immigrants for the spread of crime, drugs, & disease in his country. (And here we thought it was the corrupt officials.) He blamed the accident on human smugglers, & pledged to continue functioning as a southern flank of EU immigration policy. He couldn’t even be bothered to express condolences to those who had lost beloved family members.

Even a Greek official expressed mock condolences, saying he was “devastated” by the May 5th disaster–though he went on to blame it on “modern-day slave traders” making a killing on immigration. A UN refugee agency issued its usual wimply condolences, saying it was “deeply saddened” by the deaths; it should have denounced EU immigration policies for the unspeakable violations of human rights.

Most of the immigrants in the three disasters off the Greek & Turkish coasts were from Syria, Somalia, Eritrea, & sub-Saharan Africa. In other words, most were coming from war-torn regions & were in fact refugees, not immigrants–in the shabby sense that international law parses these differences among immigrants. Rather than condolences, the UN might consider some criminal actions against the EU & every government complicit in these crimes against immigrants.

And there’s one more matter to be addressed: accounts of the Greek coast guard & immigrant survivors from the January 2014 disaster (that killed so many children) differ on the circumstances of that accident. According to immigrant witnesses, the capsized vessel was being towed by the coast guard at high-speed while people were screaming for help. These are criminal allegations of the most consequential sort, violating so many international laws that the UN’s failure to demand an investigation amounts to collusion. Let’s call a spade a spade!

Immigration is a human right! Open the borders! (We would add, Deport the oligarchs but there isn’t a nation that will take them. They’re worthless & don’t know how to do a damn thing.)

(Photo of immigrants from AFP)