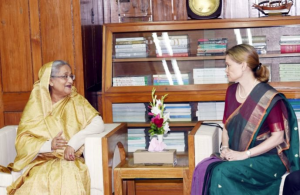 Bangladeshi Prime Minister Sheikh Hasina was not exaggerating yesterday when she told the Swedish ambassador Charlotta Schlyter that “The presence of a large number of forcibly evicted Rohingya people in Cox’s Bazar is creating a massive socioeconomic, environmental & demographic pressure on Bangladesh.” She already had her hands full managing a recalcitrant labor force, extracting maximum profits from 5 million child workers, & turning the country into a sweatshop inferno, in Dante’s sense of the word. She told the Swedish diplomat that Bangladesh has plans for even more sweatshops across the country which child labor makes particularly attractive to foreign shysters deciding where to invest.

Hasina has proven extremely successful in advancing massive inequality & the interests of exploiters in Bangladesh. When she took office in January 2009, there were only 5,114 Bangladeshi multimillionaires. In just nine years in office, she has increased their numbers to 68,891 multimillionaires. She’s a very busy woman & has no time for the socioeconomic demands of refugees like food, toilets, housing, healthcare, education. For heaven’s sake, she hasn’t got time to provide that for Bangladeshi workers. Cry us a river, sister!

That’s why she came up with the monstrous scheme of forcibly deporting up to a million traumatized Rohingya refugees back to the killing fields of Burma. That’s why she told the Swedish ambassador (something of a numbskull herself) that Bangladesh still plans on deporting Rohingya refugees to that uninhabitable island flooded out most of the year by monsoons. She also expressed appreciation to ambassador Schlyter for Sweden’s humanitarian support for the Rohingya refugees. What support would that be? Exactly how much money has Sweden provided for those socioeconomic demands of the refugees. We’d like to see an accounting verified by Rohingya representatives. How many Rohingya refugees has Sweden offered asylum to, complete with visas, work, education, & healthcare rights? Words are just words, sister. We live in a hard-scrabble world where action talks & bullshit walks.

Support our Rohingya brothers & sisters by demanding no forced deportation, dump the vicious plan for the flooded island, & that Rohingya refugees be allowed asylum in any country they choose with full refugee rights.