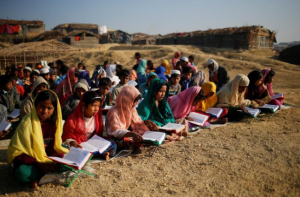 A Bangladeshi guy named Hamidul Haque Chowdhury, associated with the Awami League, the current governing party, said: “Rohingya are the main reason for all the troubles throughout the country, including Cox’s Bazar. They have been associated with criminal offenses such as killing, mugging, larceny & terrorism.”

That echoes Trump’s racist nonsense about Mexican immigrants being all rapists & criminals. Several studies going back decades show the crime rate among Mexican immigrants isn’t even close to that of native-born US citizens. The evidence in Bangladesh is also overwhelming of criminality toward Rohingya, including kidnapping & human trafficking, with no evidence & very little likelihood that traumatized refugees are engaged in crime sprees.

Photo is Rohingya kids learning how to read the Quran at
Kutupalang Unregistered Refugee Camp in Cox’s Bazar, Bangladesh.