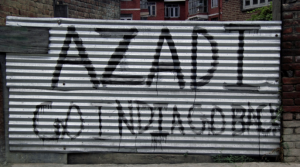 In an article on the current siege in Kashmir, Al Jazeera quoted a commander of Indian paramilitary forces who said Kashmiris don’t understand that the Indian military came to Kashmir “to protect them & today we are standing here to protect them” against Pakistan.

When asked about this graffiti which is written all over Kashmir, often by elderly men & women, the commander said in what Al Jazeera described as “a softly spoken manner” that “This may be another country’s propaganda to misguide people,” referring again to Pakistan.

Not content with that idiocy, our military man continued: “Local politicians are imparting bad ideas to the children.” Pointing to a nearby group of protesters, he said, “Like in this group, a five-year-old is throwing stones, a three-year-old! What you are taught as a child, you can never forget, & yet, we think of these people as our own.”

Al Jazeeera doesn’t like to ask the hard questions. Like why are you shooting pellet guns & live ammo at people, including three-year-olds, that you think of as your own?