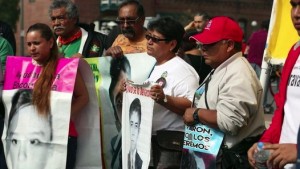 It’s going on nearly 10 months since the Mexican military disappeared 43 student teachers from the Ayotzinapa teacher training college. In March, their families embarked on a caravan across the US to build solidarity & put pressure on the US & Mexican governments to return the young men in the same condition they were abducted.

It’s still possible to protest in the US without being disappeared whereas in Mexico over 30,000 have been disappeared in the past several years with the direct involvement of the regime bankrolled by the US Pentagon.

It’s not yet the time for requiems since the families believe their sons are being kept in special secret prisons for dissidents. But as time passes, it will be harder to keep up political momentum necessary to release them. We should take a moment to honor these young people who stood on the front lines against political repression, commit to solidarity with their families efforts, & hope to emulate their tenacity.

You may want to like this FB wall in solidarity: https://www.facebook.com/ayotzinapavive?fref=ts