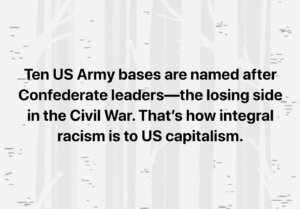 Kashmiri photojournalist Masrat Zahra, recently harassed by Indian occupying forces for her work, was awarded the 2020 Anja Niedringhaus Courage in Photojournalism Award by the International Women’s Media Foundation. The award is not just a personal honorific for Ms Zahra but a recognition of the Kashmiri freedom struggle. 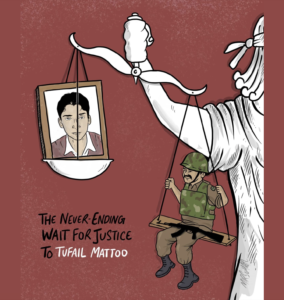 The never-ending wait for justice to Tufail Mattoo, by Mir Suhail.
#justicefortufailmattoo
#kashmir

From the NY Times today on the ‘lockdown within a lockdown’ in Kashmir: 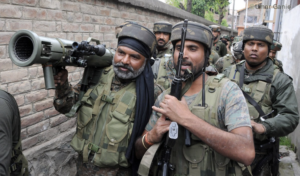 That bazooka-like weapon carried by the Indian soldier on the left is a Carl Gustaf M3 manufactured by Saab in Sweden. It is a high explosive weapon used by special forces against bunkers, tanks, & armored vehicles & in Kashmir is routinely used to demolish homes in hunt to kill military operations. India signed the first contract with Saab for Carl Gustav M2 weapons in 1976 & for the Carl Gustav M3 in 2005. In 2016, Saab began scouting for partners in India to develop & manufacture the M4 in India.
This photo is from a May 5th, 2018 military operation in the Chattabal area of Srinagar. The Carl Gustav M3 features in many photos of that operation in which three Kashmiri men were killed, there was extensive damage to homes, & a 22-year-old civilian named Adil Ahmad Yadoo was crushed by an armored vehicle. Syed Ali Geelani, Mirwaiz Umar Farooq & Yasin Malik issued a joint statement saying, “Unaccountability has made the forces in Kashmir utterly contemptuous of the life of Kashmiris. The murders are hidden through brazen lies as in the case of Yadoo by saying it was a traffic accident.” The use of such high explosive weapons in a densely populated urban neighborhood only reinforces the utter contempt the Indian Army shows for Kashmiri lives.
In 2012, during a genocidal siege by the Burmese military against the Rohingya, Carl Gustav M3 weapons purchased from Sweden by India turned up in Burma, left behind by government troops in their fight against ethnic Kachin rebels in the northern part of Burma. There is photographic documentation, including the serial numbers of the bazookas. The question was how Burma had obtained the weapons from India when the European Union maintained a weapons embargo against Burma since 1996. Did Saab attempt to bypass the embargo by trafficking them through India? India, of course, denied that it had trafficked the weapons to Burma. So how in the hell did they get there from Indian arsenals? Neither Sweden nor India can appeal to their credibility on this issue & it is not reckless speculation to suggest the two countries may have been in cahoots. If the Burmese generals used them against the Kachin people did they also used them against the Rohingya during the 2012 siege in Arakan state?
By allowing the sale of Carl Gustav M3 weapons to India, the government of Sweden is directly implicated in the colonial occupation of Kashmir & in the monstrous crimes committed using these weapons.
(Photo by Umar Ganie, May 5th, 2018, from a military operation in Chattabal, Srinagar) 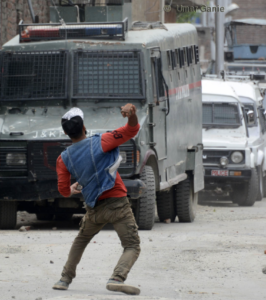 Whilst on May 5th, 2018, Indian Army special forces used armored vehicles & the Carl Gustav M3 bazooka in the densely populated area of Chattabal in Srinagar, a young Kashmiri stood fearless with a rock against armored vehicles. Who but a fool would chastise the stone pelters of Kashmir & Palestine when faced unarmed with such overwhelming military force & aggression?
(Photo by Umar Ganie)

It’s reported that in the 2010 Kashmiri Intifada, at least 120 civilians, mostly teenage boys, were killed by Indian forces who were for the first time using pellet munitions. Kashmiris are posting photos of some of them. We should take a moment to honor all of them for their contribution to Kashmiri & human freedom. May they Rest In Peace as we join forces with Kashmiris to end the colonial occupation of Kashmir.

This is Shahmali Begum who is nearing 90-years-old. She is the mother of Maqbool Bhat, a man who came from a peasant family, went on to become a school teacher, & then to become a leading voice of Kashmiri freedom. He was hung & buried unceremoniously at Tihar Prison in 1984.
Maqbool was the eldest of Shahmali’s five sons. Her son Habibullah was forcibly disappeared when he went to meet Maqbool at Tihar Prison before his execution. Ghulam Nabi & Manzoor Ahmad were both killed in separate encounters with Indian Army forces. A fifth brother Zahoor Bhat lived in Pakistan-administered Kashmir for 20 years & returned in 2009 to address a public rally in their home town of Trehgram in Kupwara on the 25th anniversary of Maqbool’s death. The J&K police & CRPF special forces cordoned the village early in the morning & arrested him. He has been detained six or seven times since then under the Public Safety Act.
Shahmali continues to work tirelessly to have Maqbool’s remains returned for respectful burial in Kashmir. It is really no wonder that she produced five sons for the Kashmiri freedom struggle.
This video by Fahad Shah is about Shahmila & has footage of Maqbool’s speeches which shows what a remarkable orator he was:

A longtime Facebookfriend just dumped me in a huff because I won’t say nice things about Jacinda Ardern. She said: “It’s so easy to sit from your sofa & criticize one and all. I’ve hardly ever read any praise for people who are trying to get things right. I read & agreed with a lot of your posts but I’m going to unfriend you as I prefer to read someone who is willing to see a bit of good in this world & not always the worse.” The difference between us is not that I’m sitting on my ass in a misanthropic stupor & can’t see any good in the world. We’re looking in different places for ‘good’. I see plenty of good in the struggles of the oppressed & their allies against war, occupation, persecution, genocide. I see courage, sacrifice, heroism, compassion, solidarity, martyrdom, determination, hope, & a visionary aspiration for human freedom. Don’t ask me to see courage in the rotations of two-bit politicians who compromise on the struggles of the oppressed, as Ardern has on the Kashmiri struggle. It’s not my right & I don’t have it in me to broker discounts on behalf of those fighting war, occupation, persecution, genocide. If you want that kind of compromise from me, you’re barking up the wrong tree. If you don’t like it, get it off your chest & denounce me as sectarian. It will roll like water off a duck’s ass. 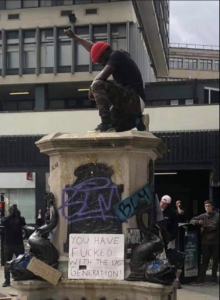 This is such an iconic photo from Bristol, UK where antiracist protesters had just toppled & disposed of the statue of the slave trader Edward Colston. “You have fucked with the last generation.”
(Photographer not identified but location is verifiable)