New Zealand declares itself corona-free & that’s just great. But it still doesn’t remove the stink of Hindutva nationalism from prime minister Jacinda Ardern who was an enthusiastic, even rabid supporter of the lockdown of Kashmir & fawned all over Modi at the UN like a lapdog. Treating her like a rock star is especially pathetic when we see so many Kashmiris burned out of their homes & made homeless during this pandemic by Indian Army predations. How much cognitive dissonance do we have to tolerate toward politicians? 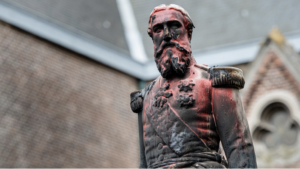 International protesters in solidarity with George Floyd are forming Black Lives Matter movements to address the colonial heritage of their own countries. In Bristol, UK, protesters tore down & dumped the statue of a trafficker in the Atlantic slave trade. In cities across Belgium, including Brussels, Ghent, & Antwerp, protesters are defacing & torching monuments to King Leopold II who ruled Belgium from 1865 to 1909 & oversaw the colonization of Congo. He is called the ‘monster of the Congo’ because he is responsible for the murder, mutilation, & heinous crimes against up to 15 million Congolese. The 1994 Rwandan genocide where at least a million lost their lives has political roots in the policies of Belgian colonialism.
In Brussels, they climbed onto his statue chanting ‘murderer’ & waving the flag of the Democratic Republic of Congo. In Ghent & Antwerp, they defaced a statue of him with red paint & the inscription, “I can’t breath.” Many Belgians have long worked unsuccessfully to get his monuments removed. An online petition his garnering signatures at the rate of 10,000 a day. In the long run this movement will succeed & will replace the statues of the monster colonizer with monuments to Patrice Lumumba who helped lead Congo to independence from Belgium in 1960 & died before a firing squad in 1961 with all evidence pointing to the Belgian government. Lumumba once said, “The day will come when history will speak… Africa will write its own history…it will be a history of glory & dignity.”
These international actions resonate with Black activists & their supporters in the US tearing down statues of Confederate generals in Florida, Virginia, & elsewhere.
This statue of Leopold the monster is in Antwerp after it was set on fire & splashed with pain (June 4th).
#BlackLivesMatter
(Photo by Jonas Roosens/Belga/AFP via Getty Images) 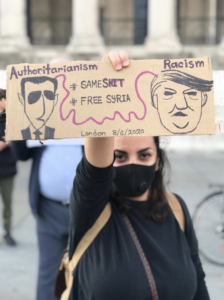 Protest for the Syrian Arab Spring in London, June 8, 2020, corresponding with protests in Syria against the Assad dictatorship & against foreign intervention.
–Photo tweeted by Waad Al-Kateab, Syrian exile & director of award winning documentary ‘For Sama’

These kids are Wissam & Zain from the award-winning documentary ‘For Sama’ about an underground hospital in Syria run by partisans of the Syrian Arab Spring. The filmmaker Waad Al-Kateab was involved in organizing the hospital & was the wife of the leading doctor. They now live in exile in London.
It is of course a seamless transition for partisans of the Syrian Arab Spring to support Black Lives Matter.
#BlackLivesMatter
(Tweeted by Afraa.hashem) 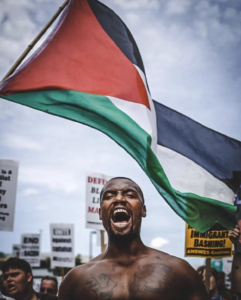 This photo of the Palestinian flag was taken at a Black Lives Matter protest during the 2016 Republican convention in Ohio. Some express concern that forging unity between the many liberation struggles will confuse activists, dilute the message, & weaken solidarity. But we have several years experience now in seeing the power of collaboration between Palestinians & the Black community. We have seen the power of Kashmiris under a brutal occupation come out in protest for Palestinians, Rohingya, Syrians. War, occupation, genocide are systemic & not extemporaneous events. The struggle against racism & supremacies of all kinds is a common struggle for all humanity if we are to survive on this planet.
#BlackLivesMatter
#PalestinianLivesMatter
#KashmiriLivesMatter
#RohingyaLivesMatter
#UyghurLivesMatter 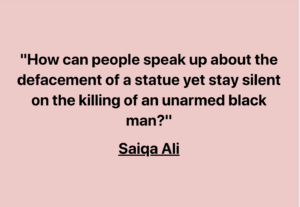 “No government in India has ever done anything for the Kashmiri Pandits apart from using them as a political tool to further delegitimise, demonise and oppress Kashmiris.”
–Tweeted by Madeeha Majid @MadeehaMajid9 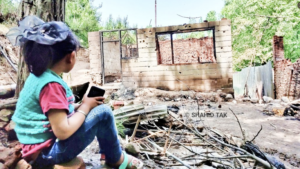 Four-year-old Mehr Ul Nisa looks at the remains of her family home demolished in an Indian Army & J&K police operation in Pinjoora, Shopian district of Kashmir. The little girl & her family were made homeless in the midst of a deadly pandemic.
Stand with Kashmiris & demand the immediate, unconditional withdrawal of all Indian forces from Kashmir.
(Photo by Shahid Tak) 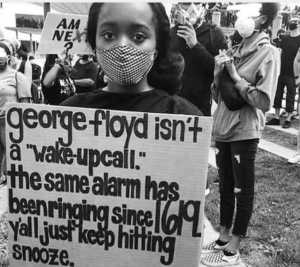