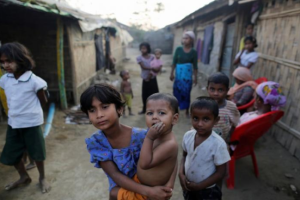 In her recent BBC interview, Aung San Suu Kyi said being under house arrest in her mansion in an exclusive area attended by maids was “not like being in jail.” Of course not. That’s why if you accept all the human rights hype around her, you’re letting yourself be played by the Burmese military junta in league with multinational corporations who want in on the Myanmar market without being criticized for collusion with ethnic cleansing.

Being under house arrest in your exclusive mansion is also not like living in the concentration camps where about 150,000 Rohingya live under apartheid conditions after their homes & fields were torched & they had no place to go. Suu Kyi calls it a counter-insurgency operation to find the killers of nine border guards last October but why is it directed against the Rohingya when the regime has no idea who conducted the assaults? And why has it now gone on with varying degrees of intensity for several decades?

This little Rohingya internal refugee girl in Arakan state is holding her baby brother in one of the concentration camps. But Suu Kyi claims there is no persecution, there are no apartheid conditions. Muslims are hostile she claims & are killing each other. Shades of Assadism. Shades of Adoph Hitler too.