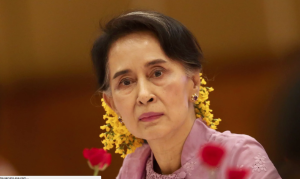 The Nobel Peace laureates include Desmond Tutu & Malala Yousafzai & others of more questionable human rights credentials. They criticize Suu Kyi for the military crackdown on Rohingya Muslims that began October 9th after nine border guards were killed by unidentified attackers. The Myanmar government has no idea who killed the border guards but claimed the attackers were Rohingya “jihadists” associated with Al-Qaeda & ISIS & cynically used the incident as a pretext to accelerate the ethnic cleansing of Rohingya which has been going on for decades.

More often than not such protests by dignitaries do not rise above the level of the naughty finger & scolding but this open letter is very forthright indeed. The signatories not only call the military response to the border guard incident “grossly disproportionate,” but they warn of the potential for genocide & crimes against humanity. In no uncertain terms, the letter stated: “It would be one thing to round up suspects, interrogate them & put them on trial. It is quite another to unleash helicopter gunships on thousands of ordinary civilians & to rape women & throw babies into a fire.”

The signatories also did not pull their punches in laying responsibility on Suu Kyi & said that despite repeated appeals she had taken no initiative to ensure the protection of the Royingya. Chickens are coming home to roost for sister Suu Kyi who thought she could pull off giving a human rights face to genocide in Myanmar.

This letter to the UN comes just a matter of days after the scurrilous, shameful report by the International Crisis Group (ICG) denying genocide against the Rohingya & claiming the military crackdown was against Rohingya “jihadists” associated with Al-Qaeda & ISIS. There was no need for ICG to pretend they did an investigation. They look stupid & corrupt for plagiarizing the Suu Kyi regime’s justification for genocide.

Rohingya activists are running with this open letter because it is a powerful & cogent rebuttal to the ICG report & cuts through the lies used to justify genocide in Myanmar & to deny Rohingya refugee rights.

As if it wasn’t testimony enough that according to the foreign ministry of Bangladesh, since October 9th, 50,000 Rohingya fled to asylum in Bangladesh from genocide in Myanmar.

Our fullest solidarity with the Rohingya in Myanmar, Bangladesh, & to Rohingya refugees wherever they are.