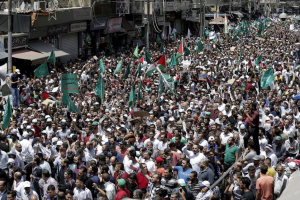 The extreme violence against Palestinians at Al Aqsa mosque & attacks on unarmed worshippers is a call to arms. It’s time to call emergency rallies around the world demanding Israel end its provocations at the mosque, end the occupation, end the blockade of Gaza.

At these rallies we could draw the connection with other struggles, especially the provocations of India at Jamia Masjid in Srinagar & the occupation of Kashmir.

This photo is a protest in Jordan in defense of Palestinians & their right to worship at Al Aqsa without harassment & provocations; there were also protests in Malmo, Sweden & London.

All out in defense of Al Aqsa mosque. End the occupation.