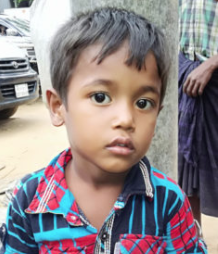 According to Dhaka Tribune (a useful source of information about the Rohingya refugees), the Bangladesh government has so far identified 23,487 Rohingya children as orphaned by the Burmese army. This is three-year-old Ahad who was taken to asylum by a distant relative who found him crying in the yard of his house after he couldn’t find his parents. There are no estimates of the number of women, young & old, who’ve been widowed by the genocide.

Stand with the Rohingya against genocide & for human, democratic, civil, & refugee rights.

(Photo of Ahad from Dhaka Tribune)