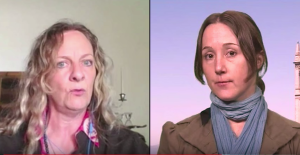 By their own admission, they have only been “experts” & “independent journalists” on Syrian politics since 2014. The Syrian revolution has been going on since 2011. That’s like calling yourself a doctor after taking a four-hour course in first aid & learning how to administer CPR. Bartlett (omitting her tutelage by David Icke) actually admits her education came mostly from Global Research, the Canadian conspiracy rag based on anti-Semitic, Islamophobic, & fascist fear-mongering. It lost its cachet for anyone with all their political marbles when in 2011 it tried to discredit all the Arab Spring uprisings involving millions of Arabs in several countries as street theater orchestrated by the CIA & Mossad. That’s when their contempt for Arabs & Muslims was lit up in technicolor & they began to attract the haters & deranged lost souls in politics. Beeley admits to no education of any kind except in horse back riding. Both are clearly paid propagandists for Putin & Assad. Their primary talent is willingness to say anything to justify counterrevolution & the bombing of civilians. Sycophants are a dime a dozen but Islamophobia prefers to use women to peddle the detestable notion that Arab & Muslim women need white western Christians backed by bombers to teach them how to be free. Color them fascists & white supremacists.