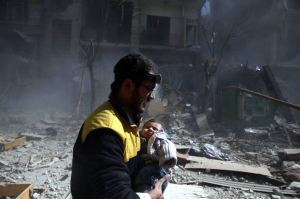 Assad propagandists Bartlett & Beeley peddle the ideology of nihilism, the extreme cynicism that claims nothing in the world is real or can be trusted. No coincidence that nihilism is the ideology of fascism. Their nihilism derives from inner nefarious compulsions combined with financial remunerations & regular gigs on RT & David Icke media. You can make a good living these days shilling for war, occupation, & genocide. That’s why they claim bombing of civilians in Eastern Ghouta is staged & that bombing victims are actors, terrorists, human shields for terrorists, & even dolls. Bartlett has made a parody of herself by endlessly recycling the claim: “I’m back from Syria. Everything you’ve been told about Syria is a lie.” (You can’t make that claim if you’ve been in Syria embedded up the ass of the Syrian Army.) That’s why the two of them hammer away nonstop denouncing mainstream media as irrelevant & why they impugn the integrity of Amnesty, Human Rights Watch, Médecins Sans Frontières (MSF), & every other voice that condemns the bombing of civilians in Syria. One can have significant political criticisms of media & all these groups but it is deceit & nihilism to claim their work is all lies as part of a conspiracy to discredit Assad & Putin.

MSF/Doctors Without Borders, founded in 1971, works in conflict zones, natural disaster & epidemic areas. Among other projects, they worked on the Ebola epidemic in West Africa, have a fleet rescuing African refugees in the Mediterranean, have field hospitals in Rohingya refugee camps, support medical facilities in Afghanistan, Syria, Iraq, Yemen, & elsewhere. It’s probable one can make political criticisms of them on examination. For example, one can question why MSF shut down its operations in Kashmir. But they have no reason to lie about their facilities being bombed or about how many civilians they’ve treated for bombing & artillery injuries. They don’t have medical personnel in many places, including Syria, precisely because they would be bombed to death.

But nihilism goes where human decency fears to tread so Bartlett claims MSF is complicit with Al Nusra, ISIS, & “foreign jihadis & mercenaries.” Beeley says it’s proven that MSF works with terrorist groups. Proven where? Well of course by Bartlett & Beeley commentary on RT & in the other Syrian & Russian propaganda fronts they run. The sole purpose of denouncing MSF as associated with terrorists is to discredit their reports that in violation of international law, healthcare facilities & civilians, not terrorists, are being bombed by Syrian, Russian, & US coalition warplanes.

MSF reports that in the two weeks between February 18th & March 3rd, 4,829 civilians in Eastern Ghouta have been injured & 1,005 killed by Syrian & Russian bombing–344 injured & 71 killed every day. They say this data collected from 20 medical facilities which they support is an underestimate because two health centers have not reported & because statistics from the many health centers in Eastern Ghouta independent of MSF are not included. That is why Bartlett & Beeley try to impugn the work of MSF as associated with terrorists.

The White Helmets posted this photo saying “No words can describe what is going on in Eastern Ghouta.”