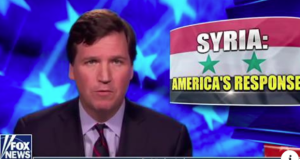 You wanna know what Assad propagandists & their fellow travelers are reduced to? They’re all circulating a video of Tucker Carlson on Fox News denouncing US military intervention into Syria. Some preface it by saying “I can’t believe I’m doing this” but others don’t bother with the disclaimer since Carlson speaks so well to their derangement. Carlson is one of the most rabid & racist rightwing voices on US media who spends most of his time vilifying & ridiculing immigrants, refugees, & the Black community. He’s a class-a dirtball.

The US is militarily involved in Syria. To date, it has dropped over 100,000 bombs & missiles & has killed tens of thousands of civilians. Carlson has never uttered one peep of protest. If he now opposes US intervention, it is only because he dreads that it might weaken the Assad dictatorship & strengthen the popular uprising against Assad. Is Carlson the best Assad supporters can do? Yes it is & it goes along with them citing other rightwing politicians like Dick Black or “retired” CIA, FBI, & Pentagon officials leading the US antiwar movement. Fox News is indeed the natural habitat of those who support the Assad dictatorship & Syrian & Russian bombing of civilians.

If you take a principled antiwar stand, you do not march alongside the likes of Tucker Carlson. Crypto-fascists are not our allies. You demand the immediate cessation of bombing by Syria, Russia, & the US coalition & the immediate, unconditional withdrawal of all foreign military operations from Syria.