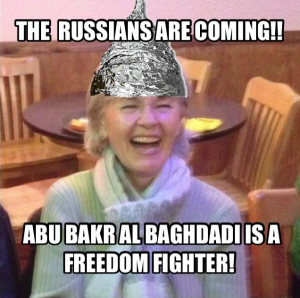 File this under “If you dish it out, you have to to take it too.” It’s an Assadist rebuttal to my criticisms of George Ades, the Cypriot who endorses Assad, Putin, & Trump. It unfortunately represents the intellectual level of Assadist theoretics. It’s as naught compared to how they vilify the White Helmets, baby Omran, little Bana, & Syrian working people struggling against Assad’s dictatorship as “head-chopping jihadists.”

Abu Bakr Al Baghdadi is the leader of ISIS to whom I am being unfavorably compared.

It would be hilarious if it weren’t so deeply tragic that so many have gotten lost in libertarian war-mongering & hating on Muslims & Jews–a hatred which aligns them with fascists & supremacists & weakens the Palestinian struggle & antiwar movement.