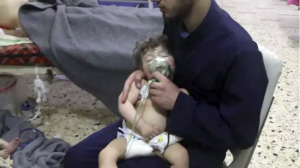 While Assad propagandists & their fellow travelers in the antiwar movement feverishly denounce all who claim Assad bombed civilians in Douma with chlorine gas, many who oppose the Assad dictatorship ‘await & hope for news of US airstrikes’ on Syrian targets. No wonder Assad is on the cusp of decisively defeating the Syrian revolution. When Syria bombed civilians in Khan Sheikhoun with sarin gas in April 2017, the US retaliated with airstrikes–after warning Syria & Russia. They bombed empty airport hangars because they gave the regime time to evacuate personnel & move equipment. The US airstrikes deterred nothing & the counterrevolution proceeded apace. Witness Eastern Ghouta & Idlib. Calling on the US to militarily act against Assad is the very essence of cognitive dissonance & political derangement. What about the Mother of All Bombs in Afghanistan & the murderous sieges of Mosul & Raqqa have supporters of US “humanitarian intervention” missed? Calling on the US to bomb in Syria legitimizes US presence in Syria & elsewhere when it has no right to be there & no purpose other than as part of the counterrevolution. There is not a single instance in US military history when it intervened to support a popular revolution against dictatorship.

Of course Assadists & their guppies in the antiwar movement deny Assad’s use of chemical weapons on civilians & blame the attacks on terrorist groups associated with the US. Their primary political function is to obfuscate military reality & deny the revolution. Our response should not be to turn to the US Pentagon to save the revolution but to demand the immediate cessation of bombing of civilians & the immediate, unconditional withdrawal of all foreign military forces from Syria.

Photo is an infant in Douma receiving treatment for chlorine gas inhalation.