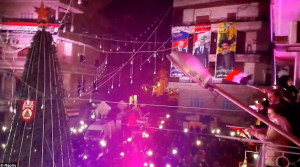 A Russia Today video with the message “Aleppo locals celebrate Christmas after city liberated from jihadists” is circulating like wildfire among Assad supporters along with photo albums of plump, jubilant children around giant well-lit Christmas trees from Vanessa Beeley who claims to be in east Aleppo. They proclaim this is the first Christmas celebration in Aleppo since 2012.

The cynicism of this deception is as contemptible as war propaganda gets. The photos are all from west Aleppo, the government-controlled area & the festivities have certainly been orchestrated for propaganda purposes. There is a children’s choir, musicians dressed as Santa Claus, banners in support of Russian bombers, The flags in this photo have images of Assad, Putin, & Hezbollah leader Hassan Nazrallah (media caption says third person is Iran’s president Hassan Rouhani).

There are no celebrations in east Aleppo which is overrun with the Syrian Army, Iranian & Russian special forces hunting down opponents of Assad & remaining militia fighters. The temperatures in the past few days have gone from -3C (26F) to 6C (43F) while thousands of civilians being evacuated at gunpoint have been forced to stay outside in a snowstorm waiting for the buses to arrive. Women, children, elderly had to light fires to keep warm as they waited.

The civilians of east Aleppo have endured nearly six years of daily bombing for standing against the dictatorship of Assad; they are war-traumatized & starving. They are terrified because many of their men & boys have already been rounded up by the Syrian Army & their fate remains unknown: will they be executed outright, tortured first, or disappeared into Assad’s gulag? They are terrified because those being forcibly evacuated are being moved to another area under aerial assault by Syrian & Russian bombers. They don’t know what will happen to them & their beloved & have no control over their fate.

What kind of person witnesses this devastation & terror with stone-cold equanimity & has the unspeakable treachery to claim the people of east Aleppo are dancing in the streets? What kind of monster is Vanessa Beeley & is the Assad regime paying her & Bartlett enough to expose their criminality & venality to the entire human race? They better wallow in those likes & shares on FB now because history will not be fooled so easily as the Muslim-haters, anti-Semites & war-mongers who make up the ignorant stooges who follow them.

As a postscript: the narrative on the Russia Today video is all about the liberation of Christianity from “jihadist terrorists.” What prevented Christmas celebrations in west Aleppo after 2012 since it was under government control? It should be noted that during the several years of Syrian & Russian carpet bombing of east Aleppo, the Muslim high holidays could only be celebrated if there was a temporary halt in bombing.

The photo below is reality of east Aleppo now: 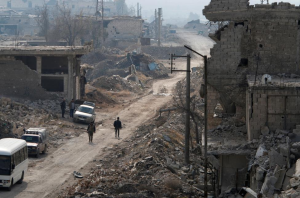