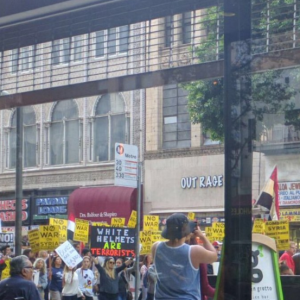 This photo was taken at the Hands Off Syria Coalition rally in Los Angeles on Friday protesting the killing of a couple old airport hangars. One of the Assadists is holding up a placard reading “White Helmets are Terrorists.” In the context of the US so-called war on terror, that is a deliberate provocation inviting US bombers to target rescue workers in Syria.

Last week, Bilal Abdul Kareem, a US journalist in Syria, announced he had filed a lawsuit against the Trump administration for including him on the US kill list. Assadist social media sites were filled with elation & fist pumping that Kareem was being targeted by US drones.

Calling for the US to target civilians, rescue workers & reporters in Syria betrays the stinking rotten politics of Assadist forces. Since when do progressive antiwar forces call on the US Pentagon to bomb rather than immediately, unconditionally withdraw? Since when do they turn their backs to accusations that Assad is gassing & bombing civilians but get roused to furor over a couple old airport hangars? Since when do they proclaim the Syrian army a salvation army & denounce rescue workers as terrorists?

There is still time for erstwhile antiwar activists & socialists to withdraw from this conglomeration of political degenerates. Make a clean break before you end up in the same political place as fascists of other generations.