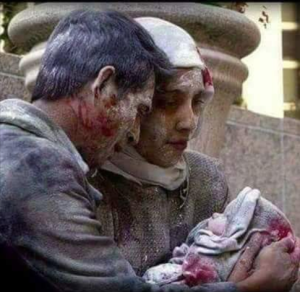 Allow me to speak in my own voice to address the contemptible imputations against the war-traumatized children of Aleppo by Assadist propagandists, including Vanessa Beeley, Eva Bartlett, & Tim Anderson, & circulated all over social media like wild fire.

This genre of war propaganda began with mocking 5-year-old Omran Daqneesh as a staged hoax after the August 17th Russian bombing of Aleppo which killed his 10-year-old brother Ali.

One would think that at least reluctant Assadists would consider targeting children in war propaganda to be beyond the pale, especially when used to distract from Syrian & Russian carpet bombing of civilians. Regrettably they don’t.

A whole new batch of this rubbish has erupted & is now circulating on social media, including one from Sputnik News, wholly owned by the Russian government, titled “Egyptian Police Bust Staged Photo Shoot of ‘Wounded Aleppo Children’.” Other Assadists say children in Syria are just ‘playing dead’ & photos to the contrary are all fake news.

This is my 50th year as an antiwar activist. I have actively opposed US wars in Vietnam, Laos, Cambodia, Panama, Granada, Somalia, Libya, Iraq, Afghanistan, Yemen, Nicaragua & Central America, & elsewhere. Never before have I seen the suffering of children in war mocked or in any way used in propaganda. It isn’t just that they were too sacred to involve but that it would have been unthinkable to blame children who were victims of war. Assadists have no such shame.

That’s because never before has a section of the antiwar movement degenerated into enthusiastic support for war, bombing of civilians, & dictatorship as they have in Syria. They thereby separate themselves decisively from the historic traditions of anti-militarism–no matter what bizarre justifications they give for it.

The children of Syria have been subjected to daily bombing, including with barrel bombs filled with chlorine, for over five years. Why would anyone mock hundreds of thousands of small children who have suffered injures, permanent disability, war trauma & post-traumatic stress syndrome, & witnessed others buried alive in rubble or blown apart by bombs?

Call the vilification of children in Syria what it is: not just criminal & contemptible but the hallmark of stone-cold reactionary propagandists for war.

Photo is family in Aleppo.

(Photo from FB wall of ELEGANCE)