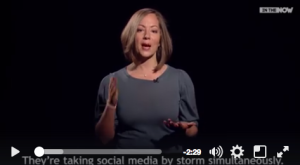 This is a screenshot from a video posted on the FB wall of In the NOW which is part of Russia Today (RT), wholly owned by the Russian government. The commentator is Anissa Naouai who manages In the NOW as an employee (one hesitates to defame journalism by calling her a reporter) of RT.

This video which has been viewed over 1.7 million times & shared nearly 75,000 times is lowbrow Assadist propaganda making the rounds on social media.

The videos of Syrian reporters & activists in east Aleppo, terrified as the Syrian army advances towards them, are so compelling & wrenching that Assadists have lost their marbles trying to discredit them. They drag out three white women–Naouai, Beeley, & Bartlett–formally associated with Russia & Assad & who have never set foot in east Aleppo to claim the Syrians are fakers. A grade school video class could do better propaganda. Why 75,000 people find it convincing is probably psychologically related to why so many people find Trump persuasive. Or Rodrigo Duterte.

Naouai does not point to a single piece of evidence that the Syrians are fakers; it just doesn’t feel right to her. She’s paid big bucks to be stupid. She actually said on her own wall: “I can’t tell you what’s happening in East Aleppo, because I’m not there. So I won’t. But I also don’t believe a word the mass media is saying because they are not there. All we can do is question the message & do our best to find holes.”

But just a moment here: RT is mass media with millions of viewers around the world. As an employee, does she have inside information that RT is peddling lies & misinformation? Because it sure looks like it when they report on Syria & the Ukraine.

It would be troubling that so many find this scurrilous rubbish & Assadist propaganda convincing but it is almost certain their political affinities for Assad, Putin, & Duterte render them incapable of judgement.

To show how reactionary & contemptible all this is, In the NOW on FB & Twitter & Naouai on her Twitter wall posted this video of a smug Philippine president Rodrigo Duterte & chirpy music threatening the lives & wishing a last Merry Christmas to drug addicts & thieves: