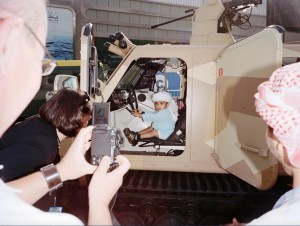 Constant war is an inner compulsion, the driving force of neoliberalism, the barbaric phase of capitalism. But for tens of thousands of people, war is not carnage & devastation–it’s good business. Is it rational when so much of the Middle East is a killing field, that Abu Dhabi in the UAE hosts a biennial International Defense Exhibit (IDEX) to showcase the latest in bombers, tanks, grenade launchers, anti-tank missile systems, air-to-service rocket launchers, surveillance satellites, semi-automatic weapons?

A lot of business goes on that that event that this year drew 100,000 arms dealers, military & government officials from around the world. The amount of transactions at the 2005 IDEX totaled USD $2 billion; but according to one research institute, arms sales of the top 100 arms dealers & military services at the 2013 IDEX totaled $402 billion. There’s no report on what was spent at the IDEX last February but the UAE’s armed forces alone signed contracts worth $5 billion.

According to Paramount Group (a South African consortium of military manufacturers), military spending among Middle Eastern regimes grew to $120.6 billion in 2014. Now the question arises, who would they be defending since it certainly isn’t the people of Yemen, Bahrain, Egypt, Syria, Iraq, or Palestinians? With such an arsenal among Middle Eastern regimes, how did ISIS get to be such a threat? Or are they arming themselves against their own people?

This year, 1,200 companies from 56 countries displayed their military wares. Those who think building an antiwar movement is just for those in countries doing the war-making, what about those countries that produce the arsenals? Like Sweden–Bernie Sanders’ model for socialism? Warfare is an international enterprise: an army will be bombing with US jets, driving tanks from Sweden, shooting down aircraft with Russian equipment, & taking out villages with assault weapons from China.

Arms dealers don’t worry about things like weapons “falling into the wrong hands.” Business is business; war is business. The US can no longer claim ISIS is armed by weaponry captured from the Iraqi Army in 2014. Conflict Armament Research, an NGO that tracks movement of military weaponry internationally, concluded last year that ISIS is armed by US & Chinese munitions (including small arms & heavy equipment like Humvees) “transferred by the US & Chinese governments to regional actors for use against ISIL troops.” They found 20 percent of ISIS munitions were manufactured in the US. If in fact “regional actors” are handing US weapons over to ISIS, why doesn’t the US stop arming the “regional actors”? To cover its ass, the Pentagon claims the US lost track of 250,000 small arms provided to the Afghan army which may have been provided to ISIS. If the US can’t even trust its own allies, maybe it ought to get the hell out of there.

We’re supposed to think this child behind the wheel of an armored vehicle at the IDEX is just adorable. It isn’t. We don’t like our children considered as cannon fodder for arms dealers. We don’t like our beautiful planet turned into a military fortress & killing field. Build the international antiwar movement to end this monstrous perspective once & for all.