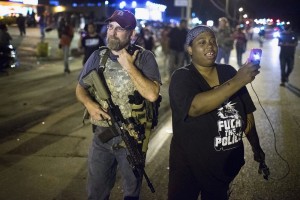 Officials in Ferguson made quite a flap about 18-year-old Tyrone Harris Jr. having a hand gun before they shot him several times. He’s in the hospital now in critical condition. So those same authorities have some explaining to do about why they allow the Oath Keepers, a heavily armed civilian paramilitary goon squad, to openly patrol protesters in Ferguson to prevent looting. They have not been deputized & have no right to be there standing on rooftops & patrolling protesters–armed with assault weapons.

According to reports, the Oath Keepers chatted amiably with police & strolled around with their AK-47s without any action taken by law enforcement. Why is that? Because they’re white guys with guns? Because the cops knew a lot of them from the police department?

The Oath Keepers are a right-wing vigilante group founded in 2009 by Stewart Rhodes, a Yale Law School graduate, former army paratrooper, & former aide to Ron Paul. To be a member you have to be current or veteran military, police, or first responder. They claim their purpose is to “defend the Constitution against all enemies, foreign & domestic” & their stated purpose in Ferguson is to protect businesses against the threat of looting. That means they intend to shoot down those in the Black community who might lob a brick at a pharmacy or walk off with some toilet paper from a store.

The heavily-armed goon squads are a clear & present danger to the Black community but the authorities accept them amicably as an auxiliary force. Now doesn’t that tell you something about martial law against the Black community!? The Oath Keepers should be asked to stand down & if they refuse they should be forcibly removed from Ferguson under threat of incarceration.

The photo is an Oath Keeper vigilante patrolling the Black community which was under martial law.

Our fullest solidarity with the Black community in Ferguson.