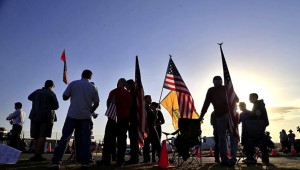 The 150 anti-immigration protesters harassing buses of undocumented immigrants at a Border Patrol station in Murrieta, California near San Diego are making a lot of news–even though the LA Times reports they were outnumbered by immigration rights activists. That’s the media’s way of making it appear anti-immigration sentiment is a groundswell in the US–& thus helping to create one.

When the O.J. Simpson verdict was announced in 1995, the media was thunderous about how it exposed polarity between Blacks & whites in this country. It was alarming to hear many whites emboldened in their most primitive thinking & discussing how the verdict showed the impossibility of “racial” harmony in the US.

Serendipitously, the Million Man March in Washington, DC was just a week after the verdict. It was more a religious parade than a civil rights protest but it was a massive show of power when close to a million Black men & women showed up. It muted, in one fell stroke, all the bellicose rhetoric against Black people both in the media & among racist whites.

That’s what is needed now so that anti-immigration sentiment does not crescendo. Power is a very daunting thing but it needs to be mobilized.

Immigration is a human right! Open the damn borders! Close down the immigration jails!