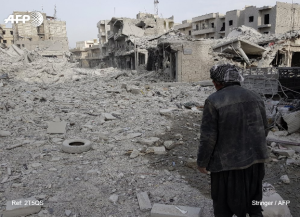 There’s a clamor among many opponents of the Assad regime calling for US military intervention in Syria. With Jesuitical finesse, they parse Syria from Iraq, being careful to leave out any mention of Yemen, Afghanistan, or Libya & willfully unaware of countless US wars, occupations, invasions since WWII. The more lowbrowed among them appeal to shame by claiming ‘Syrians are praying for US intervention.’ Which Syrians are praying for US bombers & special forces? The millions displaced & made refugees by over 100,000 US bombs & missiles? The tens of thousands who were bombed to smithereens in Raqqa, including by white phosphorous? If you want to war monger, don’t hide behind the Syrian people. Don’t justify it by idiotic comparisons between Assad & Saddam Hussein. Just put your hand on your heart & say outright that you believe in bombers as a force for human liberation, that you think the US Pentagon has emancipatory visions for its nearly 1,000 military bases all over this planet. But don’t play us for stupid.

No US-coalition, Russian, or Syrian bombing in Syria. All foreign military forces out now!

Photo is apocalyptic Raqqa after US “humanitarian intervention” against ISIS.