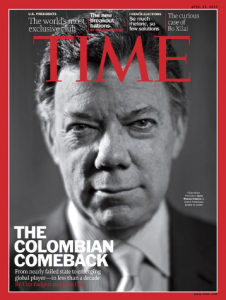 Colombian president Juan Manuel Santos was the recipient of the 2016 Nobel Peace Prize for negotiating a peace treaty with the FARC guerrilla group active in Colombia since 1964. The Nobel recipient must have been in the works for a while since the peace treaty was defeated in a popular referendum last Sunday.

It’s been a few years since I closely studied the conflict between the Colombian government & FARC but either would be a worthy recipient of this discredited honorific. The coffee & cocaine oligarchs of Colombia don’t operate in the shadows as the US & other oligarchies do. They directly run the country & are as worthless & thuggish as this guy looks. FARC activities are indistinguishable from criminality. There should have been a joint award.

I am reminded of the 1987 Nobel recipient Óscar Arias Sánchez, then president of Costa Rica. He won it for his so-called peace plan to address conflict in Central America–Nicaragua, Honduras, Guatemala, El Salvador. A central feature of the Arias plan was more US military involvement in Central America.

I lived in Boston then & of course was involved in antiwar campaigns against US involvement in Central America. Arias was invited to speak at Harvard University which must be on the inside track about who will be the Nobel recipient. Several from the antiwar movement went to hear him & sat in the bleachers of a packed-out audience.

In his presentation, Arias said Nicaragua had held their first democratic election since the Sandinistas took over in 1979. (I don’t recall if he meant the 1984 election which the Reagan regime called a sham.) The entire Harvard audience broke into thunderous applause at the renewal of democracy in Nicaragua which was then under sustained economic & military attack by the US & its proxy guerrilla group called the Contras.

At the question & answer period, I raised my hand in the peanut gallery to respectfully ask him why his peace plan for Central America proposed more US military involvement & tried to lay out in a succinct way why antiwar activists considered his plan at odds with peace.

Throughout my no longer than two-minute question, the audience booed, hissed, heckled, tried to shout me down. It was my first experience with such aggression for asking a question at a public forum—& probably a rare moment when those distinguished & pompous-assed professors would express themselves so coherently & briefly. It felt like being shot at in a barrel but I kept telling them to pipe down & let me finish. Which I did. Arias was there to be honored & fawned over, not to be challenged, & did not respond to my question.

Out of all the battles I’ve had in my political life, that moment of discombobulation from being heckled is one of my few regrets. I like to have the last word with my nemeses. Till today, it still bugs me that I didn’t ask the assembled fawning rowdies, “Is the audience trying to shout me down for asking a question the same one that just applauded so vigorously for democracy in war-torn Nicaragua?”

Call me spiteful, but I’ll go to my grave annoyed by that missed opportunity.