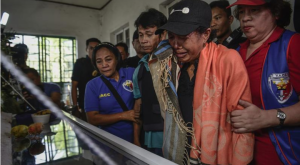 For the first year of Duterte’s vigilante war against the poor which began when he took office on July 1st, 2016, Filipino media published the numbers & even the names of those executed on the streets as well as photos showing the gruesome torture they were subjected to. Death squads, including vigilantes & police, were killing at the rate of 1,000 people a month. Since Duterte & his family are implicated in drug trafficking, it is unlikely drug users or peddlers were the intended targets & more likely that it is part of ongoing attempts to clear out urban slums for neoliberal development projects. Torching slums is another of the methods used. We cannot accept that the victims were drug offenders since they were denied due process & simply tortured & executed on the street.

For the past year, it has been impossible to find any estimates of the number of death squad victims. It’s not clear why that has been so but it’s possible threats by Duterte thugs are involved. In January 2018, a Human Rights Watch (HRW) report estimated that 12,000 people had been killed since July 1st, 2016 but they do not explain where they get that estimate & since Filipino media, at risk of repercussions, reported 11,000 victims in January 2017, it’s unlikely that HRW estimates are reliable.

A more reliable estimate comes from opposition senator Antonio Trillanes in a speech before the Philippine Senate on February 21st. He claimed that the death toll has surpassed 20,000 since Duterte took office & he bases that staggering estimate on statistics from the Philippine National Police & Philippine Drug Enforcement Agency who admit to 3,967 executions in the first 16 months & 16,355 homicides “under investigation” in the first 15 months of the vigilante war. Senator Trillanes’ estimate accords with the death rate of 1,000 per month monitored by Filipino media. In the same report, the National Police admit to 79,193 “anti-drug operations,” 118,287 arrests, & 1,308,078 surrenders by drug offenders. They actually posted these figures on FB as achievements of the so-called war on drugs. They didn’t report any due process procedures for those arrested or for those who surrendered. Are they still stuffed like sardines on top of each other in squalid prisons? Almost certainly. Are they allowed access to legal counsel? Unlikely.

Many of those killed in the “anti-drug operations” are teenagers & young children who Duterte refers to as “collateral damage.” This is not a war against drugs. It is a war against the urban poor. Martial law in Mindanao is not against ISIS & terrorism but against Muslims & political dissidents. Duterte ordered his troops to shoot women rebels “in the vagina.” He must be condemned for criminal violations of human rights. We must stand steadfast with courageous Filipino human rights activist who dare stand publicly against these atrocities.

Photo is of those grieving their beloved executed in Duterte’s war on the poor.