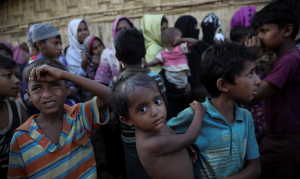 Let’s talk about that absolutely appalling Amnesty report titled “Myanmar: New evidence reveals Rohingya armed group massacred scores in Rakhine State” which is a sustained indictment of ARSA (Arakan Rohingya Salvation Army) for “killings & violent attacks against members of Hindu & Buddhist ethnic groups.” First we’d like to know how Amnesty got access to Arakan state since it ends its dishonest report with a call for Burma to “immediately allow independent investigators, including the UN Fact-Finding Mission, full & unfettered access throughout the region.” Were Amnesty investigators allowed special access by the regime? Were they escorted by regime officials? Were restrictions placed on where they went & who they interviewed? Why was Amnesty investigating ARSA who they claim killed 99 Hindus rather than the Burmese military & Buddhist death squads who killed, tortured, raped thousands & sent 700,000 fleeing for their lives? What’s up with that Amnesty? Where’s the sense of proportion?

Amnesty claims that accountability for atrocities is just as crucial for irregular forces as for security forces. Of course, even though the magnitude of the genocide against Rohingyas dwarfs the alleged crimes of ARSA. But the actual charges of Amnesty against ARSA really cannot be considered seriously until Amnesty lays out for us its methodology, who escorted them, what restrictions were imposed by the regime on their investigation, & why Amnesty was allowed access when even the UN has been barred entry.

The fatal flaw in this report is their assertion that the genocide was prompted by ARSA attacks on 30 police posts & an army base, a number which most likely came from the Burmese government. But Rohingya activists, the citizen journalists who were disappeared in the genocide, claimed the military was deploying additional forces in Arakan & preparing for the genocidal onslaught long before August 25th, 2017 when the alleged ARSA incitement took place. Does Amnesty really think it reasonable to blame a handful of irregular ARSA forces for inciting a state-sponsored genocide of such a colossal scale?

To put this report in context, Amnesty issued a report in 2015 on Israel’s 2014 seven-week bombing onslaught over Gaza which was just as shameful as this piece of rubbish on ARSA. The report on Gaza justifies Israel’s murderous siege by claiming it was bombing “possible military targets” in response to thousands of Hamas rockets & mortars (the evidence of which does not exist) when it bombed ambulances, hospitals, schools, apartment buildings, refugee centers in Gaza.

There’s a shameful pattern to these reports: Amnesty’s equation of self-defense with military aggression. That equation allows Amnesty to water down the genocidal aggression of Israel & Burma & in that regard these reports are absolutely worthless apologetics. What should concern Amnesty, or at least it should have been mentioned in the report, is the apparent disappearance of ARSA in the past several weeks. Wouldn’t that suggest that the real perpetrator of atrocities in Arakan state was in fact the military & its auxiliary Buddhist death squads? One doesn’t have to be a supporter of guerrilla warfare to understand that in a genocide, ill-trained & inadequately armed irregulars like ARSA had a right to defend unarmed Rohingya civilians. Whether or not they committed human rights crimes against Hindus should be investigated within the context of a genocide against them–not to rationalize their acts but to understand how & why they occurred. As Javed Akhtar commented on Twitter: “If there is a mass grave of Hindus,” as Amnesty claimed, “it must be the army’s doing. Or why were hundreds of Hindus also escaping with Rohingyas?”

Shame on Amnesty. It’s a pity they compromise their credibility by such unsubstantiated & worthless reports that amount to apologetics for genocide.

(Photo of Rohingya refugees in Bangladesh by Marko Durica/Reuters)

For comparison, this is my analysis on March 28, 2015 Amnesty’s 2015 report on Israel’s 2014 seven-week bombing onslaught in Gaza which blames Hamas:

There is only one appropriate response to Amnesty International’s (AI) report issued today accusing Hamas & other groups in Gaza of war crimes during Israel’s Operation Ethnic Cleansing last summer–& that is to tell them to take that report & put it where the sun don’t shine. It’s utterly shameful because AI knows exactly what is going on between Israel & Palestinians: apartheid & ethnic cleansing. And if you stand for human rights, you don’t pull your punches in proclaiming that.

AI goes on to say Israel hit “possible military targets” (like the school run as a UN refugee center?) but that “the devastation to civilian lives & property…was clearly disproportionate to the military advantages gained by launching the attacks.” If you want to learn the art of equivocation you can start with that shameful sentence. “Possible military targets” justify carpet bombing entire neighborhoods? Would bombing hospitals, refugee centers, & apartment buildings have been all okay if Israel gained some military advantage at the expense of hundreds of Palestinian civilians? Aren’t there some international laws against that? The question must now be asked: does AI have its head stuck up its ass?

Not content with equivocation, AI’s report today is a moralistic piece of rubbish that might fly at a right-wing Evangelical convention but is loathsome to those who deal with political reality & justice. The report cites UN data (when it comes to Palestinians the only source more questionable than Israel) that 4,800 rockets & 1,700 mortars were fired from Gaza toward Israel while Israel was laying down megatons of bombs on Gaza. Because of Israel’s Iron Dome missile system only 224 landed. Why is there so little evidence of the hits? Why haven’t they produced some photos of the destruction? The AI report masthead had a photo identified as a missile being fired from Gaza to Sderot, Israel. The same Sderot where psychos pulled up easy chairs in the hills to cheer on genocide in Gaza during the entire siege?

The report was very damning of the indiscriminate projectiles used in self defense against those megaton bombs. AI objected that they were unguided & couldn’t be accurately aimed at military targets. That’s what happens when you’re forced to improvise with second-rate munitions. And that’s a war crime now? Can AI cite the article in international law? Isn’t it more like “callous indifference” than war crime? Carpet bombing may involve some war crimes but unguided missiles definitely do?

The report stoops to its lowest when it accuses Palestinian armed groups of storing rockets & munitions in civilian buildings & near where civilians were taking shelter, “including UN schools.” So when Israel bombed that school used as a UN refugee center with mostly women & children they saw some military advantage so it’s all okay with AI? They must have missed Israel’s admission that there were no munitions in the center. Just the kids they were targeting.

AI wants Palestinian groups to “avoid locating fighters & arms within or near densely populated areas.” The way Israel is setting the whole thing up is a case of shooting fish in a barrel since Gaza is such a small territory so what AI is really suggesting is that Palestinians do nothing to defend themselves against barbarous assaults by land, air, & sea.

Over 2,191 Palestinians were killed, including 530 children, & thousands of homes were bombed to smithereens. Over 12,000 people were injured, including 3,374 children, 2,088 women, & 410 elderly people. The UN estimated 1,000 of the children will suffer lifelong disability, including loss of limbs, & 373,000 require psychosocial support. There were 6 Israelis killed, no reported injuries. And AI says only some of the carnage in Gaza amounted to war crimes when the entire operation should be denounced as a genocidal assault. When you parse justice you end up serving genocide. And issuing reports better used as toilet paper.

Build the economic & cultural boycott of Israel & demand not a penny of aid of any kind to Israel.