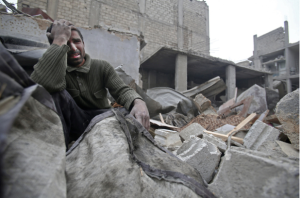 In their feverish defense of Assad & to counter photographic & video documentation of carpet bombing civilians in Eastern Ghouta, Assad supporters claim Syria & Russia are only bombing head-chopping terrorists without explaining why they’re bombing cities & towns with tens of thousands of civilians. Others, like Assad official Fares Shehabi claim the bombing & artillery siege is a movie tableau & the bodies, rescued, & rescuers only Hollywood actors.

The only acting going on is in the UN Security Council where the countries militarily engaged in Syria are doing an awkward pas de burlesque denouncing each other. Trump’s ambassador to the UN Nikki Haley is denouncing Syria & Russia for the bombing of civilians. After dropping the Mother of All Bombs in Afghanistan ostensibly to take out Taliban fighters, after Mosul, Iraq & Raqqa, Syria, where the US used ISIS as a pretext to bomb those two cities into dead zones, the US is not a part of the solution but at the heart of the counterrevolutionary problem. It’s insane for so many to call on the US & European countries to intervene on the side of civilians. What do they not understand about the US Pentagon? Where have they ever seen evidence of a humanitarian purpose in US or European military interventions?

Stand with the people of Eastern Ghouta by demanding the immediate cessation of Syrian, Russian, & US coalition bombing of civilians & the immediate, unconditional withdrawal of all foreign military forces–overt, covert, mercenary–from Syria.