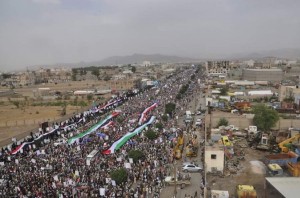 Al-Quds Day, held annually on the last Friday of Ramadan, is an international day of solidarity with Palestinians. Quds is the Arabic name for Jerusalem. The commemoration originated in 1979 in the Iranian revolution that overthrew the Shah of Iran–who in accordance with his US allegiances was an ardent supporter of Israeli colonialism. Regardless of reactionary political developments in Iran since then, Al-Quds Day remains a powerful international day of solidarity with Palestinian self-determination & the heritage of a revolution that overthrew the murderous Shah.

There have been several protests reported around the world & there is one in London today. This is a photo of the Al-Quds protest in Sana’a, Yemen last Friday. What makes it so remarkable is not just the size reflecting massive solidarity with Palestinians but that Yemen remains under aerial bombardment by Saudi-led, US & UK-backed warplanes.