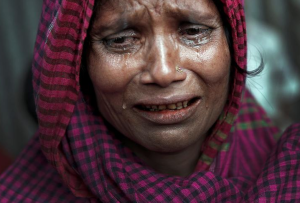 Al Jazeera reports that as of today, 800,000 of the 1.3 million Rohingya living in Arakan state have fled for their lives. Dishonestly, Al Jazeera also reported that the exodus began on August 25th after the Burmese army retaliated to ARSA attacks on 30 police stations & an army base–allegations that came from the Burmese military & are therefore doubtful if not altogether lies. The implication to this narrative, repeated by media & governments around the world, is that Rohingya extremists incited a genocide when it has been shown quite conclusively that the Burmese army was preparing this genocidal offensive weeks in advance & only a few months after the last offensive had ceased. ARSA hasn’t been in existence for even a year & could not possibly be so organized or equipped to pull off any major operations against one of the most brutal & well-equipped military forces in the world.

Stand with the Rohingya against these lies & vilifications. They are our brothers & sisters. How we respond to this genocide will determine the fate of suffering humanity around the world. Either we stand with the oppressed or with barbarism.

This woman at a refugee camp in Bangladesh is grieving a beloved family member who died from injuries inflicted by the Burmese army as they fled for their lives.