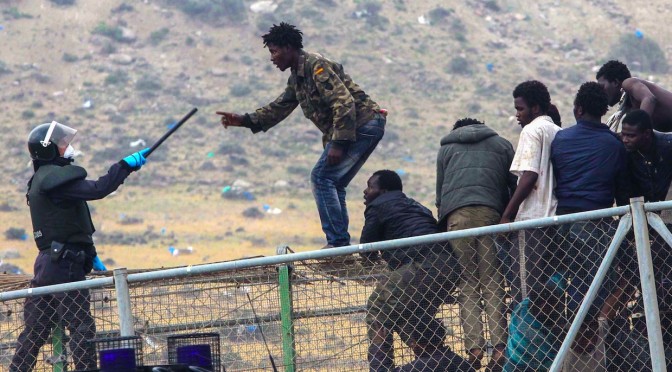 The tough one here is not the military cop in riot gear wielding the baton but the unarmed immigrants trying to rush the border fence topped with razor wire to cross from Morocco into Melilla, the north African enclave owned by Spain. They hope that by getting into European territory they stand a better chance of making it to the European continent for work.

Most who get past the daunting impediments arrive with extreme injuries from the razor wire, from being beaten by border guards (both in Morocco & Spain), from falling, & are malnourished since they’ve just spent weeks coming from their own countries. There isn’t a lot of available reporting about how they transit great distances, several borders, & difficult terrains to get to Morocco. If it’s anything comparable to what Central American & Mexican immigrants go through to get to the US, it must be a living hell.

On this occasion (May 1st), 400 immigrants stormed the border fence but only 150 got through. Those who were pushed back will camp in makeshift tents & be subjected to harassment by Moroccon police acting as a southern flank of European immigration policy. Those who do make it are not assured of moving on to Europe & are often deported & dumped back in Morocco.

How did human society come to this? How did such barbarism become the dominant political ethos of our historic era? More importantly, how the hell do we get rid of this social gangrene that forces people from their families & cultures, endangers their lives, & humiliates them as if they were beasts?

The growing combativity of immigrants in staking their rights to immigrate is a development of the greatest importance & ought to make our hearts sing. As the US immigrant rights movement chants, “No human being is illegal.” The only way to make those damn fortresses come down is to stand with them in a solid phalanx of solidarity. Neoliberal predation acknowledges no national borders & neither do we.