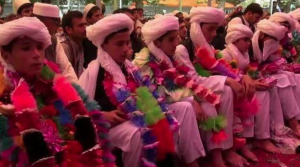 Nothing can steel you for the unspeakable war crimes the US has committed in Afghanistan since the war & occupation began in 2001. Gruesome & bestial crimes, always under the guise of fighting the Taliban & now ISIS. The crimes began immediately on the occupation when US special forces trucked hundreds of surrendered Taliban fighters in overcrowded airless shipping containers where they all died from thirst & hyperthermia & then were dumped in mass graves. The detailed description of that crime will haunt you forever. The roster of US-NATO criminality includes carpet bombing prisons with Taliban & other prisoners; several special rendition prisons like Bagram where CIA torture methods are employed; tens of thousands of airstrikes, including the Mother of All Bombs in April 2017; millions of land mines which have caused hundreds of amputations, including of children who think they are toys; massive homelessness & dislocation, thousands of children orphaned, & millions of refugees.

This Monday at noon, the Afghan air force bombed a religious ceremony going on in a madrassa in Kunduz province. It was a large festive gathering to honor little kids for memorizing the Quran & completing their religious courses. The Afghan military justifies the bombing by claiming senior Taliban commanders were present at the ceremony. The Taliban issued a statement denying any were in attendance. The death toll so far is at least 100 with 50 injured–mostly children & religious teachers. It doesn’t matter if the Taliban had a battalion of fighters & all their top commanders present at that ceremony. If there were children or civilians present, it is absolutely forbidden under international law to bomb the madrassa. Under antiwar principles, it is immoral as hell to bomb a civilian venue.

The US has absolutely no right to be in Afghanistan. It is an old adage that Afghanistan is the ‘graveyard of empires.’ May it be so that the Afghan people bring down the US empire. But they cannot do so without international support which they are not receiving after nearly 17 years of war & occupation. Our fullest solidarity with the Afghan people. Our deepest regrets at the historic failure of the international antiwar movement to mobilize antiwar opposition because it is too busy defending the Assad dictatorship & Russian & Syrian bombing of civilians in Syria.

Photo is children at the bombed madrassa ceremony. May they Rest In Peace.