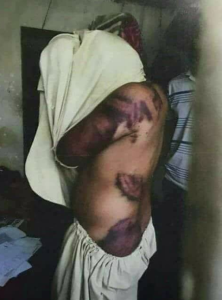 This photo is one of the 18 Kashmiris in Tihar jail near New Delhi who were brutally assaulted by special police on the night of November 21st. Kashmiri Imtiaz R Chasti compared this to Abu Ghraib, the US prison in Iraq that will forever live in infamy for extremes of violence against political prisoners; others compare it just as aptly to Guantanamo. With that in mind, read this lengthy promo from the website of Tihar jail presenting itself like a Club Fed prison in the US for well-heeled white collar criminals. “Yoga, meditation & spiritual activities,” no less. Where does beating the hell out of defenseless prisoners fit into the spiritual program? There’s another kind of rehabilitation required for Indian authorities involved in assaulting prisoners. It’s called prosecution for human rights crimes. But let Tihar jail speak for itself (quoted in full because it’s an indictment of actual practice involving beating of prisoners):
********
“Delhi Prisons strive to reform, reintegrate & rehabilitate the prisoners in the society. The challenge before any Jail Administration is to make the imprisonment purposeful in every way for those who have to undergo the same. We begin, by attempting to minimize the suffering of a person who has been imprisoned by providing an efficient & transparent administration. We provide them the opportunity to use their time purposefully & constructively by learning new skills, pursuing education & resolving their inner conflicts. It has been our endeavour to treat every prisoner in Delhi Prisons with dignity & respect.

“Today, Delhi Prisons are perceived as harbinger of human rights of prisoners & are being considered as role model by the National & International Prison Community.

“Delhi Prisons are known for innovations in correctional activities. Open/Semi-open Prison is one such effort wherein convicted prisoners having good conduct may undergo their sentence in a relaxed environment to enable rehabilitation and reintegration into the society. Yoga, meditation & spiritual activities constitute an important component of reformation & rehabilitation policy of Delhi Prisons which bring qualitative change in the life of prisoners. Thousands of prisoners have participated in the spiritual programmes conducted by the Prison administration & a marked change has been observed in their behaviour.

“There is a creche in the Prisons to take care of children till the age of six years. Later their schooling is undertaken with the help of NGOs. A number of activities are undertaken for the entertainment of inmates including TJ’s FM Radio’s have been launched in the jails to engage the prison inmates in creative activities & in learning vocational skills. The Prison inmates are encouraged to participate in creative literary activities like poetry & essay writing, journalism, painting etc. & they themselves edit the monthly newsletter of their jails.

“Jute designer bags are being manufactured by the inmates in collaboration with National Jute Board. Jute jewellery & ornament training programmes have also been started. For the first time, a collaboration with the Automobile sector has been launched for training inmates in Write Harness Training Programme.

“The projects relating to bakery, carpentry, mustard oil extraction, weaving etc. have helped inculcate skills which will open up employment opportunities for inmates on their release. At the same time, they earn for the work they do during their incarceration period & their mind is purposefully occupied. This helps to fulfill our mission to reform, rehabilitate & reintegrate the inmates.

“A number of organizations have come forth to play an active role in shaping designate of the inmates inside Prison & in their lives once their term is over & they go back to society.

(Tihar jail website where this rubbish is posted: http://www.delhi.gov.in/…/connect/Lib_Cen…/central+jail/home)