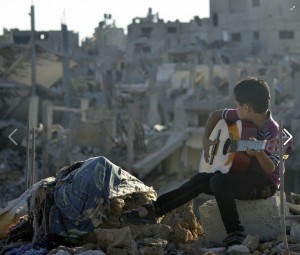 In 2010, Santana pulled out of a scheduled performance in Israel citing scheduling difficulties. Palestinians & BDS activists–giving him a respect we have learned he didn’t deserve–assumed it was because of our appeals that he honor the cultural boycott of Israel.

In a press statement earlier this year his manager denied the 2010 cancellation was due to BDS. He said, “Carlos Santana is a citizen of the World & he plays his music & spreads his message of Love, Light & Peacewherever he goes. Carlos believes the World should have no borders so he is not detoured or discouraged to play anywhere on this planet. We look forward to performing in Israel this summer.” (Those silly caps are all Santana’s.)

Love, Light & Peace, my ass! Despite months of appeals by BDS activists he will perform in Tel Aviv on July 30th as part of his Luminosity Tour. Luminosity means the brightness of a celestial object or the rate of emission of radiation but the only luminosity coming out of his performance will be the toxic emissions bouncing off the apartheid wall.

Our man is a weasel who spouts sentimental gibberish, like so many other weasels before him, to make big bucks by supporting apartheid. But we need to make sure that if we can’t stop him from disgracing himself, the whole world knows just what kind of weasel he is.

Please sign this petition circulated by Jewish Voice for Peace asking him to cancel his performance:
https://actionsprout.io/754F12?source=share

Please take a moment to like & share this wall:https://www.facebook.com/Carlos.Santana.Cancel.Apartheid.I…/Carlos Santana, Now That You Know it’s Apartheid, Don’t Play Israel

(Photo from Facebook wall of BDS appeal to Santana is of Mustafa Ismail, a Palestinian living in Gaza whose family was ethnically cleansed in 1948 from Jaffa. Jaffa,  the cultural centre of Palestinians, was occupied in 1948 & has since been for the most part destroyed & annexed to Tel Aviv. The few remaining Palestinians face apartheid & ethnic cleansing.)