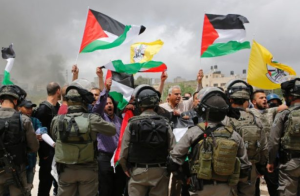 This is the 50th commemoration of the June 5th to 10th, 1967 Six-Day War when the Israeli military routed the armies of Jordan, Egypt, & Syria. It is a watershed & deeply tragic moment in Palestinian history ushering in now 50 years of occupation, apartheid, & repeated sieges of carpet bombing over Gaza.

In violation of international law, Israel militarily occupied more of Palestine, including the Golon Heights, Gaza, the West Bank, & East Jerusalem & launched an aggressive settlement program moving Zionist settlers from all over the world to claim Palestinian land in the occupied territories.

Many politicians & liberal Zionists call for Israel to remove its troops & go back to the 1967 borders. That’s essentially the unworkable, unacceptable bantustate solution. The only possible resolution is a democratic secular state for Jews & Palestinians with the 1948 borders, including all of Palestine before Zionist paramilitary terrorists dispossessed them.

Commemorate the 50th anniversary by honoring & building the cultural & economic boycott of Israel (BDS); buy nothing with barcode beginning 729.