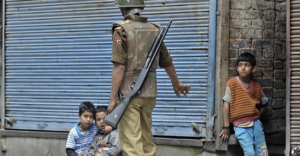 “I remain concerned by child casualties in Jammu and Kashmir and call upon the government to take preventive measures to protect children, including by ending the use of pellets against children. I am concerned by the detention of children, including their arrest during night raids, internment at army camps, torture in detention and detention without charge or due process, and urge the Government to immediately end this practice.”
–UN Secretary-General Antonio Guterres in 2020 annual report on Children & Armed Conflict
Text of report: https://reliefweb.int/sites/reliefweb.int/files/resources/15-June-2020_Secretary-General_Report_on_CAAC_Eng.pdf?
(Photo of Kashmiri kids with Indian soldier; photographer not identified)