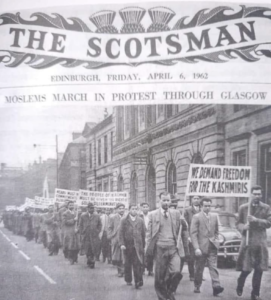 Sorcha Dannsair posted this photo from a Scottish newspaper of a protest in Glasgow on April 6, 1962 demanding freedom for the Kashmiri people. The history of Kashmiri solidarity is likely an uneven one since most of us did not know about the freedom struggle until Kashmiri activists began using social media to educate & campaign. But due to the complete lockdown of Kashmir last year & the unspeakable use of pellet guns, the issue of Kashmiri freedom is now ‘internationalized’ & a central issue in world politics.