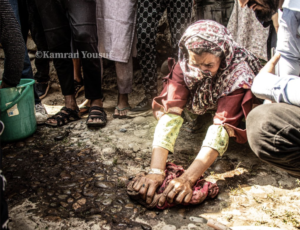 Because military operations are every morning & funerals every evening in Kashmir, there was another siege early this morning on Bandzoo village, Pulwama in South Kashmir. It was another joint operation of the J&K police & Army 44 RR & CRPF special forces. Two young men & a soldier were killed. Indian media reports that 30 militants have been killed in these operations just this month & 100 so far in 2020. They don’t mention the civilians who have also been killed, like the little boy who died from burns over 90-percent of his body.
Here a family member of one of the young men killed cleans up his blood. Indian media never report the emotional weight these military sieges take on civilians & family members.
Stand with Kashmiris & demand the immediate, unconditional withdrawal of all Indian forces from Kashmir.
(Photo by Kamran Yousuf)