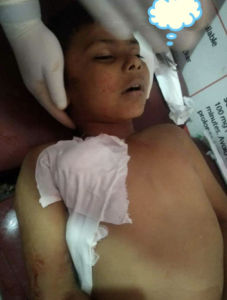 Six-year-old Nihan Yawar from Bijbehara in the Anantnag district of Kashmir is here being taken for the last rites. He was killed at noon today during a military operation by Indian occupying troops. He was with his father who was going to the market.
Omar Abdullah tweeted his condolences for the death of this little boy “in a dastardly grenade attack by militants”. Since 120 civilians, including 8-year-old Sameer Rah, were killed by the Indian Army under his tenure as chief minister, he has to put the onus entirely on militants & deny the culpability of the occupying army. His outrage is less about little Nihan than it is about justifying his own criminality.
May our little brother Rest In Peace.
Video of Nihan’s funeral prayers: https://www.youtube.com/watch?v=qZd-oOOhth0
(Photo is Nihan Yawar)

It should be noted that the funeral prayers for little Nihan Yawar were held during a deadly pandemic. If mourners are not wearing corona masks, it is probably because fears of the pandemic seem more remote than the immediacy of an aggressive, ubiquitous occupying army.