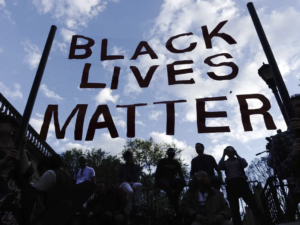 How dare major corporations attach themselves to the George Floyd solidarity movement like it was a free marketing opportunity or a bandwagon where they can stamp their logos. Nike, Adidas, Reebok, Netflix, Ben & Jerry’s, Twitter, Amazon, Apple, Levi Strauss all are using social media to denounce ‘systemic & institutionalized racism’ in the US as ‘abhorrent’ & senseless’. They should be strongly rebuked & not allowed to market off the backs of the Black community in the same uncompromising way that Kashmiris use against Indian nationalists who are all over social media with ‘Black lives matter’ placards whilst defending the colonial occupation of Kashmir.
Before these corporations have any place in a new civil rights movement, they must divest themselves of their complete reliance on sweatshop labor using black & brown women & children. Nike, Adidas, Reebok, Apple, Levi Strauss will have to demand union standards in wages & working conditions in the manufactories where their products are made to help transform sweatshops into workplaces suitable for human beings to work. Since they have profited so ruthlessly & substantially from child & female labor, they will have to establish schools, vocational training, medical centers, housing, & will have to stop working with repressive governments to obstruct labor organizing. Ben & Jerry’s, which is on the BDS boycott list, will have to sever its relationships with the illegal Israeli settlements. Twitter will have to stop censoring Kashmiris & Palestinians whilst Indian nationalists & Zionists are allowed their vituperations. Netflix will have to stop showing movie after movie portraying Palestinians, Arabs, & Muslims as rabid terrorists. Amazon will have to sever contracts with government agencies like ICE & Homeland Security that facilitate deportations of undocumented workers. If they take those modest measures we will feel more confident that their tweets like ‘Don’t turn your back on racism’ & ‘Black lives matter’ are sincere & not just marketing devices to stamp their logos all over this movement.
Microsoft asked an artist in NYC to make a ‘Black lives matter’ mural for their 5th Avenue store in Manhattan “while the protests are still relevant”, as if it were a transitory phenomenon & marketing opportunity. Cynical, yes. Contemptible, absolutely. But in so many ways more honest than Nike & all the other corporations who pretend to give a rat’s ass about racism & white supremacy.
As for the expressions of support from AFL-CIO president Richard Trumka & other labor leaders? They can’t get off their asses to defend any workers & refuse to organize undocumented workers facing deportation so they only compete with corporations in cynicism.
Black Lives Matter is a social movement to end racist persecution & white supremacy all over the world. It is not for sale.
(Photo of BLM protest from Independent/UK)