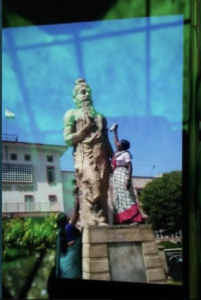 Were it not for the Black Lives Matter movement to raze white supremacist statues all over the world, this story from India might have gotten lost. This is a photo from October 8th, 2018 of two Dalit women named Sheela Bai Pawar & Kanta Ramesh Ahire along with a third associate named Dawood Shakeel Sheikh spraying black paint on the statue of Manu outside Rajasthan High Court in Jaipur, India. Manu is a Hindu mythological figure who codified the rights & duties of castes & women in the Manusmriti. Basically, it lays out the bases for Brahmanical & patriarchal superiority. It’s an ancient text & there is considerable academic dispute about the authenticity of a work that appears to have several authors. Apparently, it’s like the Hindutva Bible.
The two Dalit women were arrested & booked on several charges including offending religious sentiments. They were released on bail within a few weeks & it is uncertain what further consequences they sustained. They are part of the political current of Dalit feminist activists who object to Manusmriti for its declarations of caste & female subordination & inferiority.
There’s much more to this story which involves Dr. B.R. Ambedkar (1891-1956), the towering figure of the Dalit movement & an Indian jurist, economist, politician & social reformer who drafted the Indian constitution after India became independent in 1947. In 1927, Dr. Ambedkar gave an oration at the symbolic Dalit burning of the Manusmriti against its presumptions of Brahmin & male supremacy. He had done extensive groundbreaking theoretical & legal work on the rights of the oppressed castes & of women.
If there is anyone who should have a statue in India, it would be Dr. Ambedkar & if there are any statues that should be removed, it would be those which promote supremacist ideas which have caused so much destruction in the world.
(Photo from several sources; photographer not identified)