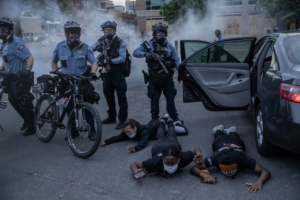 My sister Joni lives in Minneapolis about a mile from the epicenter of political protest although there are protests in several areas of Minneapolis & St. Paul. She is nearly 80 & has been protesting since the Civil Rights Movement which she got me involved in during the 1960s. We aren’t unusual for our generation since the the anti-Vietnam War movement, the Civil Rights, Black Power, & women’s rights movements of the 1960s & 1970s were transformative for thousands of people all over the world, not just in the US.
As a deeply political person, she is involved in the protests although her Black daughter & grandchildren have not yet shown the same commitment to politics. She believes the George Floyd movement is a historic moment in civil rights, a turning point in building a movement that will put an end to violence against the Black community & the murder of unarmed Blacks. She is so energized & inspired by this movement that every day she calls me several times to go over the latest developments & at night phones me so we can watch video footage together on WCCO, Channel 4, the CBS affiliate in Minneapolis.
Last night, we watched for a couple of hours as protesters came up off the freeway where the driver of an oil tanker had just driven 70 mph into a crowd of protesters. Protesters managed to obstruct & stop him (& throw a few punches his way) until police arrested him. Coming off blocking the freeway, the protesters ambled peacefully up the road for about a mile going past the 8 pm curfew. They weren’t protesting, often they were just sitting on the grass, & the political temperature was very cool. What they appeared to be doing was peacefully challenging the curfew which in fact city & state officials have no right, under the US Bill of Rights, to impose–as if citizens were children who needed to be restrained & would start vandalizing & torching if they weren’t.
Just as it got dark, phalanxes of state & city police, with National Guards standing by, began moving in to arrest the protesters, three or four officers in riot gear to every unarmed protester. For no apparent reason, they even began using tear gas against protesters sitting in the most defensive positions. The mayors of Minneapolis & St. Paul & the governor of Minnesota are playing good cop to the Minneapolis Police Department bad cop. But the curfew which they have no right to impose comes from their authority & is only being enforced by the Minneapolis police department. That’s a provocation by officials since aggressive policing in the Black community is the very essence of this political struggle. But that way, the police take the full rap & state & city officials who determine policy, including policing policy, get to act like champions of the oppressed.
This photo is from the arrests last night. Consider the fire power of pointing an assault rifle at unarmed protesters who were not breaking the law but were only peacefully challenging the right of city & state officials to tell citizens when they have to go home.
#GeorgeFloyd
(Photo by Victor J. Blue for The NY Times)