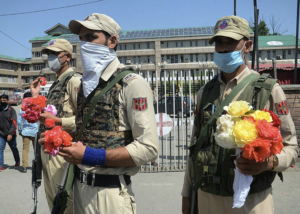 Just a week after J&K police & CRPF special forces made a dozen families homeless in Nawakadal, Srinagar at the height of a deadly pandemic, they stood outside a Srinagar hospital handing out roses to doctors entering the premises to honor them for treating corona patients. Those doctors also treat pellet gun & tear gas victims & frequently protest against the occupation so it is unlikely any of them were impressed.
If this rose thing is some kind of a public relations stunt, India has to fire its propaganda director. It’s almost as farcical but ten times more cynical & contemptible then taking pigeons into custody as Pakistani terrorists besieging the border at the Line of Control.
Stand with Kashmiris & demand Indian forces get the hell out of Kashmir & take these clowns with them.
(Photo by Basit Zargar, posted May 27, 2020)