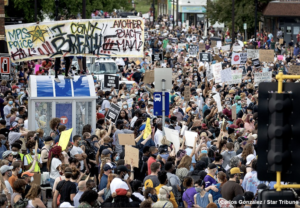 Thousands of protesters came out last night in Minneapolis chanting ‘I can’t breath’ to denounce the murder of 46-year-old George Floyd. Police were mobilized with percussion grenades, rubber bullets, & tear gas as if they were in downtown Baghdad. The Minneapolis Star Tribune reports that protesters vandalized a police precinct. Since crime data shows that Minneapolis police kill Blacks at a rate 13 times higher than white people–one of the worst racist disparities in the country–the police department can be grateful the precinct wasn’t razed to the ground.
There has been a long lull in the Black Lives Matter movement but there has been no such lull in police violence in the Black community. Hopefully, the murder of George Floyd will inspire a new generation of civil rights activists to finish the mission begun by the Civil Rights & Black Power Movements of the 1960s.
#ICantBreath
(Photo by Richard Tsong-Taatarii/Minneapolis Star Tribune, posted May 27, 2020)